Crowdfunding: Six Tips for Making Your First Campaign a Success 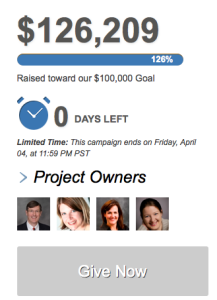 Today, more and more nonprofits and universities are turning to online crowdfunding to support projects, research, and entrepreneurship. In January a Forbes article reported that 2013 “yielded an estimated $5 billion in global crowdfunding with about 30 percent of that total going to social causes.”  When many people make a small donation, magic can happen.

In the spring of this year, Green Impact had the opportunity to support the Haas School of Business Center for Responsible Business (CRB) design and launch its first crowdfunding campaign.  The campaign was a great success, raising over $125,000, which was matched by an alumnus, bringing the total support to over $250,000 for the Haas Socially Responsible Investment (SRI) Fund.  As reported in Haas Newsroom,  “The crowdfunding platforms aim to attract engagement and financial support for research and innovation, community activity, and entrepreneurial ventures that typically fall between the campus normal funding methods and models.”

Haas chose the ScaleFunder platform, a crowdfunding provider that focuses on nonprofit, university, and technology funding. UCLA is also using the platform for UCLA Spark, an online crowdfunding platform aimed at providing critical fundraising support for innovative projects by UCLA faculty and official student organizations.Other popular platforms include Kickstarter, Indiegogo, and CauseVox. Check out How to Use Crowd-Funding Sites to Raise Money for Your Non-Profit for more details on the different platform options.

As I reflect back on the campaign, I offer six tips to help you maximize the success of your first campaign:

Read on for more details on each of these tips.

1.  Make the Project a Priority for Staff

A critical success factor for the CRB campaign was a dedicated CRB project manager who had the capacity and relationships to manage the campaign actively.  Support from an outside consultant like Green Impact is great when you have the resources, but don’t think about launching a campaign unless you have the internal capacity to manage the project.

Don’t underestimate how much work a campaign can be.  The tasks we completed in six weeks included:

Another key to success was that CRB has an active network of alumni, board members, and other key partners who are enthusiastic about CRB’s mission.  Through personal contact, a regular newsletter, blog posts, and social media networks such as LinkedIn, Twitter and Facebook, its network is active and engaged, making it easier to rally support when it came time to launch the campaign.

3. Develop a Marketing and Communications Strategy

We crafted a short and targeted Marketing and Communications Strategy for the campaign that identified our goal, target audiences, key campaign elements, engagement strategies, messaging and a timeline. The key components we included were:

For the campaign video, we worked with TrimTab Media to create a short video.  It built on existing footage we had shot for a previous CRB video, so it was a low-budget item to produce.  To build momentum during the campaign, we used more casual iPhone video updates of alumni and students speaking about why the Haas SRI Fund was important to them.  You can check out some of the videos we used to promote the campaign here.  We were advised, and I would agree, that for these types of campaign updates, less polished videos work just fine.  With a few tweaks in iMovie we were off and running.

You can check out the campaign page we created here. As mentioned above, we created a short and sweet video to help us kickoff the campaign. The description emphasized contributions would make a difference and included model language, asking supporters to help get the word out about the campaign via Twitter and Facebook.  CRB staff tapped into its network to create a robust set of perks for donors.  The $50 gift certificate from Levi Strauss & Co. to buy a pair of their Water<less™ or Waste<less™ jeans at the $100 level was popular.  The campaign was only for six weeks, creating a sense of urgency.

Haas alumnus Charles Michaels generously offered to provide matching funds to the campaign, making it even more compelling to ask others to donate.  In addition, don’t forget about employee matching funds–many corporations will match employee donations.  This provided the Haas campaign an additional $13,555.

6. Put A Face to the Campaign—Make it About People

Last, but not least, is the suggestion that you find a frame and story that is not about your organization, but about your mission and the people you serve.  The CRB campaign was about elevating student learning, as well as shaping the future of sustainable finance.  We incorporated blog posts and video clips from alumni as well as engaged students to create short videos. As an added perk, CRB was successful in gaining media attention for the Haas SRI Fund and the campaign, including an article that ran in the Guardian Sustainable Business.