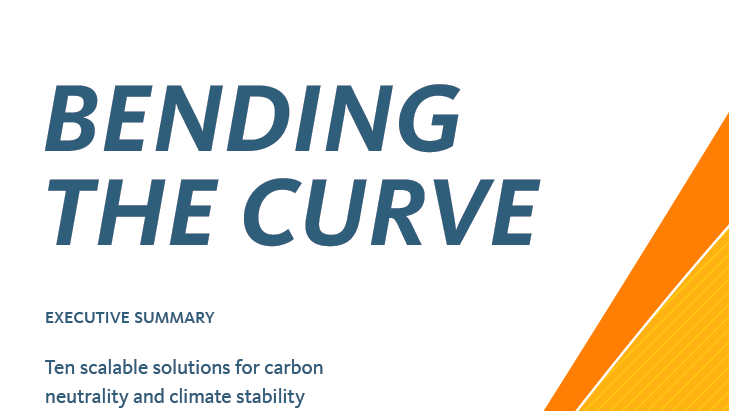 Two big announcements from the University of California (UC).  At the UC Carbon and Climate Neutrality Summit at UC San Diego last month, UC went deeper with its commitment to fight climate change, releasing Bending the Curve, a new plan that outlines 10 solutions that can be scaled to help slow global warming.  In Paris this week, it was announced that UC and its Office of the Chief Investment Officer, which manages the university’s endowment and pension funds, is the sole institutional investor among the Breakthrough Energy Coalition, an influential group of investors led by Bill Gates committed to investing in technology that can help solve the urgent energy and climate challenges facing the planet.”

The coalition is a counterpart to Mission Innovation, an initiative of 19 countries committed to dramatically increasing research and development funding for early-stage clean energy innovation over the next five years. Both initiatives were announced today at the COP21. “We can’t ask for a better partner than the University of California Office of the President and the Office of the Chief Investment Officer to help accomplish the Breakthrough Energy Coalition’s ambitious goal,” Gates said. “The UC system – with its world leading campuses and labs – produces the kinds of groundbreaking technologies that will help define a global energy future that is cheaper, more reliable, and does not contribute to climate change.”

In addition to committing to the coalition’s statement of investment principles, UC and its Office of the Chief Investment Officer will:

Bending-the-Curve presents 10 solutions, all of which the plan says can be implemented immediately and expanded rapidly — to clean our air and keep global warming under 2 degrees Celsius and, at the same time, provide breathing room for the world to fully transition to carbon neutrality in the coming decades. The plan says global warming could be slowed dramatically by reducing greenhouse gases such as methane emissions by 50 percent and black carbon by 90 percent over the next 15 years. The wealthiest need to cut back dramatically, while green energy needs to be made more available to the poorest 3 billion people, the plan says. Specifically, it introduces 10 “pragmatic, scalable” solutions. Each is briefly summarized below. Refer to the Executive Summary for more details.

2. Foster a Culture of Climate Action: Foster a global culture of climate action through coordinated public communication and education at local to global scales.

3. Deepen Global Collaboration and Dialogue–Religious and Community Leaders are Vital Allies: Deepen the global culture of climate collaboration by designing venues where stakeholders, community and religious leaders converge around concrete problems with researchers and scholars from all academic disciplines, with the overall goal of initiating collaborative actions to mitigate climate disruption.

4. Immediately Scale-up Renewable Technologies: Scale up subnational models of governance and collaboration around the world to embolden and energize national and international action. Use the California examples to help other state- and city-level jurisdictions become living laboratories for renewable technologies and for regulatory as well as market-based solutions. Build cross-sector collaborations among urban stakeholders, because creating sustainable cities is a key to global change.

5. Adopt Market-based Instruments: Adopt market-based instruments to create efficient incentives for businesses and individuals to reduce CO2 emissions. These can include cap and trade or carbon pricing and should employ mechanisms to contain costs.