Four Reasons the Pope’s Encyclical on the Environment is Important 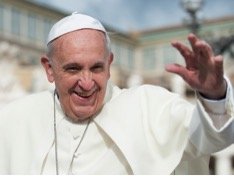 Pope Francis’ encyclical on the environment, titled Laudato Si: Our Care for our Common Home, is sparking a rare opening for change. The messages within the 184-page Papal Encyclical, including the moral imperative to take global action on climate, are gaining momentum leading up to Pope Francis’ upcoming visit to Washington D.C. September 22nd, where he will meet with President Obama and address a Joint session of Congress.

At the first in a series of interfaith events hosted by the University of San Francisco (USF) on the intersection of environment and faith, Dr. Mary Evelyn Tucker, co-director of the Yale Forum on Religion and Ecology, explained, “This encyclical, and its statement on the intrinsic rights of Nature, is a breath of fresh air. Efforts to tackle climate change and other environmental issues have been driven by science, policy, economics, technology, and law. But science and policy alone are not going to solve these problems. We need these larger values–religion, art, and philosophy.”

Four Reasons Why the Pope’s Encyclical is Important

Inspired by the Pope’s upcoming visit to the United States, I offer the following four reasons why I think his environmental encyclical is important:

A Rare Opening for Change

This is a rare moment where we have the opportunity to raise awareness and inspire action. For Catholics and non-Catholics, the encyclical has the potential to transform the global discussion on climate change by framing the planetary crisis in moral and religious terms at a strategic moment in international climate negotiations. The hope is that Pope Francis’ messages will influence policymakers at the upcoming UN climate talks in Paris later this year, as well as be highlighted in his upcoming addresses to the UN and the U.S. Congress.

According to a recent Pew Research Center study, less than half of all U.S. Catholics (47 percent) believe that global warming is a consequence of human activity. Take note–Pope Francis is saying that climate change is real and that humans are causing it. In addition, he connects stewardship of the natural world with justice for the poorest and most vulnerable.

“This opening, it’s never going to happen again in this particular way,” stressed Tucker. She explained, “This is so rich. And that is why people are responding all over the world. It’s poetic. It’s scientific. It’s spiritual. It’s grounded. It’s ecologically sophisticated. And it’s appealing to the sense that we are part of a great mystery, a huge, holy mystery.”

Appeal for an Integral Ecology

A key point to stress is that the encyclical is not just about climate change. It has a much deeper and robust reach. In a recent article in the New York Times Book Review, environmental activist and author Bill McKibben explained, “Instead of a narrow and focused contribution to the climate debate, it turns out to be nothing less than a sweeping, radical, and highly persuasive critique of how we inhabit this planet—an ecological critique, yes, but also a moral, social, economic, and spiritual commentary.”

Integral ecology, an ecology that links the human and social condition to the environment, is a key theme in the encyclical. “Nature cannot be regarded as something separate from ourselves or as a mere setting in which we live. We are part of nature,” said the Pope. USF President Paul Fitzgerald artfully expresses the concept of integral ecology in The Beloved in Nature, a video co-produced by Green Impact, in partnership with Northcutt Productions.

You can watch The Beloved in Nature below:

Part of a Larger Movement 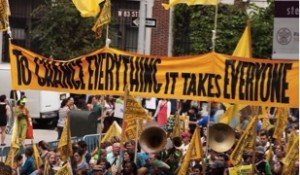 “The Papal Encyclical is igniting energy all over the world, as almost never before in our lifetime,” suggested Tucker. We are on the leading edge of a new movement that weaves science and spirit to find solutions for our social, political, and environmental challenges. “This is about long-term change, and a moral force that is unstoppable. It’s a Gandhian force of change,” said Tucker.

McKibben commented, “On a sprawling, multicultural, fractious planet, no person can be heard by everyone. But Pope Francis comes closer than anyone else. He heads the world’s largest religious denomination and so has 1.2 billion people in his flock…” Building on the Pope’s reach, other religious leaders have gotten energized by the encyclical, including more than 400 Jewish rabbis and 20 Muslim scholars, which have responded to this moment of change.

In the End, It’s a Call to Action

For the sake of Mother Nature and all living creatures, the encyclical aims to evoke contemplation, action, and change. “An integral ecology is also made up of simple daily gestures which break with the logic of violence, exploitation, and selfishness,” said Pope Francis. He ends with a call to action: “Many things have to change course, but it is we human beings above all who need to change.”

Inspired? Here are a few ways you can learn more: