Just Say No Thanks to K-Cups 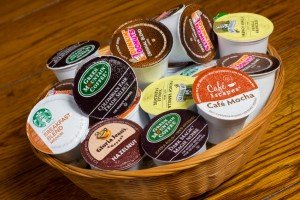 Every day over 100 million people drink coffee. And with the invention of K-Cups, it is now even easier to consume your favorite beverage without the wait. So what could be wrong with them? They are convenient, have every flavor imaginable, and can be bought in bulk for discounted rates. But these little plastic cups are also extremely bad for the environment. According to Mother Jones, in 2013, enough K-Cups were sold that if placed end-to-end, they would circle the globe 10.5 times. And the tragedy is that almost all of them end up in the garbage and ultimately the landfill.

Although this new technology was created for offices, a 2013 survey from the National Coffee Association found that nearly one in eight American households owns a single-serving coffee machine and 13 percent of people drink coffee made from a single-cup brewer every day.  Last year Keurig Green Mountain, the manufacturer of the machines and pods, produced 9.8 billion K-Cups. Yes, 9.8 billion!

The majority of the cups are made up of a #7 composite plastic, which is nonrecyclable in most places.  For the cups that are recyclable, the aluminum lid must be separated from the cup and the cup must be rinsed to remove the wet grounds. According to the Natural Resources Defense Council, even if the cups are recycled, chances are the pod won’t be recycled because it’s too small.  Keurig has promised to make all of its single-serving cups recyclable by 2020, but it is not clear this is a viable solution.

According to a recent post on Delish, some cities are getting rid of K-Cups entirely to cut out what they see as completely unnecessary waste.  In Hamburg, Germany, coffee pods have been banned from state-run buildings as part of a new environmental movement.  According to Quartz, even the creator of the K-Cup has stopped using them out of guilt, saying that he “feels bad” about their wasteful impact.

So do the Earth a favor and skip the K-Cup.  Reach for freshly ground coffee to make your daily brew. Then compost the grounds.  If you just can’t give up your K-Cup habit, there is an alternative to consider:  a reusable coffee filter.

To Learn More About K-Cups:

K-Cups are Getting Banned